Why We Created a Course on Theft Prevention.

The latest addition to the Project Bono library of court-ordered-courses is Theft Prevention. Otherwise known as larceny, theft is defined by the FBI’s Uniform Crime Reporting (UCR) Program as the unlawful taking, carrying, leading, or riding away of property from the possession of another. Among these are thefts of bicycles, motor vehicle parts and accessories, shoplifting, pocket-picking, package theft, or any other type of theft that is not committed through force, violence, or fraud.

The FBI’s UCR Program reported that the rate of theft or attempted theft in 2018 was 1,594.6 per 100,000 inhabitants. In that year, victims of theft lost an average of $6 billion nationwide.

In the state of California, if the value of stolen goods is valued under $950, it is considered a misdemeanor offense punishable by up to 6 months in jail and a fine of $1,000. Those that are convicted of larceny will often be required to complete probation requirements like community service and enroll into a correctional education program like Project Bono in order to avoid jail time.

Rather than incarcerate individuals convicted of petty-larceny at the expense of the taxpayers, Project Bono's alternative allows offenders to be educated on the error of their ways while contributing a portion of enrollment proceeds towards community enrichment in order to offset the burden on taxpayers.

Millions of American consumers prefer online shopping for its convenience as ecommerce continues to grow rapidly. Home delivery is convenient, but it comes with a risk of package theft, which persists across the nation.

C+R Research's 2020 statistics report finds that 59% of 2,000 respondents receive a package weekly. In comparison with 2019, this is an increase of 10%. Since ecommerce spending has grown along with the COVID-19 pandemic and supply-chain constraints, many Americans choose online shopping because they are unable to find stock of items locally.

In total, 36% of respondents reported being victimized by a package theft in 2019, and 43% in 2020. Almost two-thirds (64%) of those who have had a package stolen say they have been victims of package theft more than once.

To prevent package theft, half of the victims have installed doorbell cameras, motion lights, or other surveillance cameras. However, these security measures aren't always effective against masked thieves.

Organized looting is nothing new. For centuries, there have been instances of people gathering and burglarizing businesses even in broad daylight. Today, you might come across security footage of groups of people driving a car through the front windows of an Apple store and looting the location-tracked devices on display.

At the start of the 2021 school year, a trend known as the Devious Licks Challenge gained traction on TikTok. The trend encouraged students to make videos of themselves stealing or vandalizing school property. This includes bathroom soap dispensers, exit signs, fire extinguishers, projectors, and computers. In one instance, a student stole the door of their principal’s car. This resulted in untold dollars of loss and damage.

Even while thieves are incarcerated and the money and goods are seized by authorities, thieves still manage to steal from taxpayers. Taxpayers cover the costs of food, housing, and prosecution of the incarcerated.

What our Theft Prevention course aims to do is provide those convicted with a comprehensive correction education on the consequences of the continuation of their actions as well as ways that they can be self-sustaining and seek employment even after a conviction on their record to alleviate the burden on taxpayers and prevent the incarcerated from continuing to steal after their sentencing.

Project Bono provides the most affordable up-to-date online classes that fulfill court and employer mandates while contributing 25% of proceeds towards charitable causes. 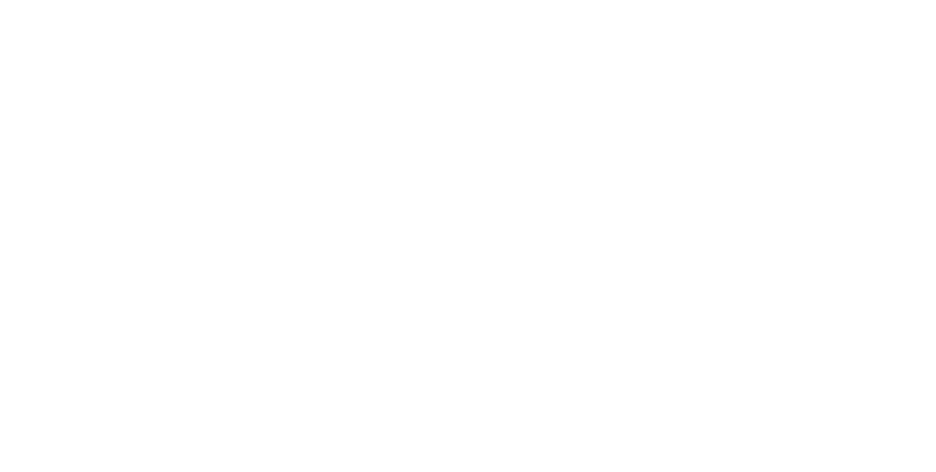 All of our courses are backed by a 30-day money-back guarantee. If your certificate of completion is not accepted, contact us with proof of decline.

We recommend you confirm that your assigner will accept our certificates before you enroll in any of our courses. 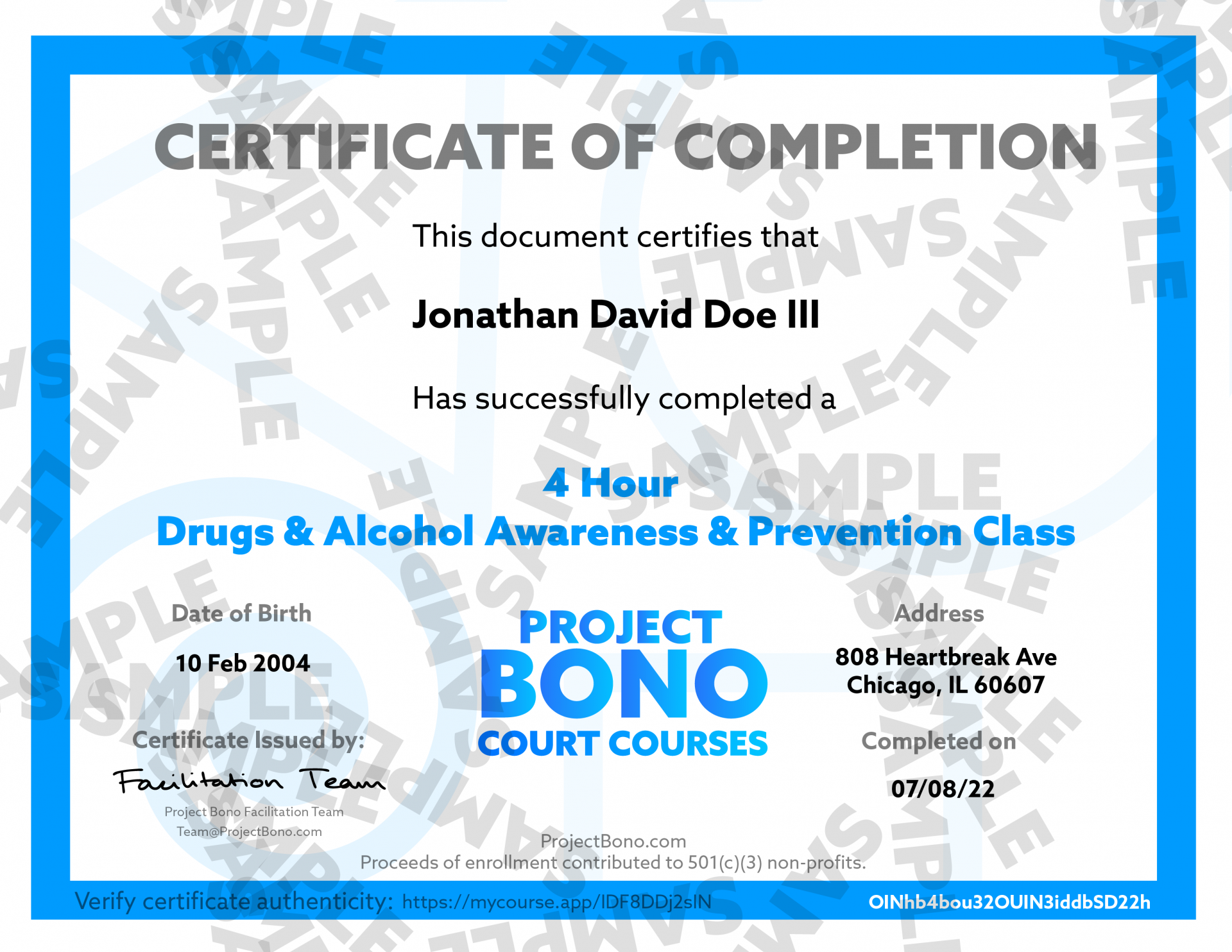 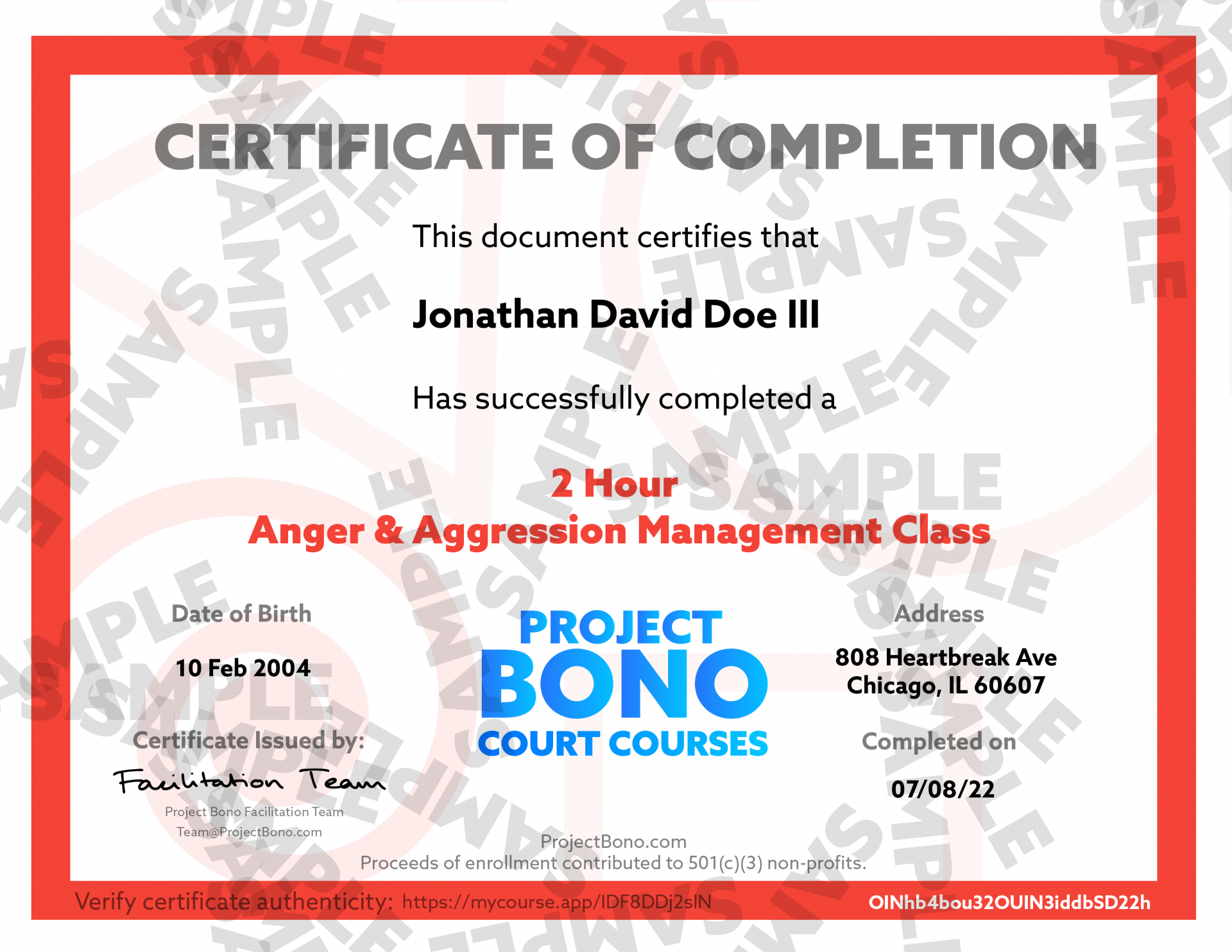 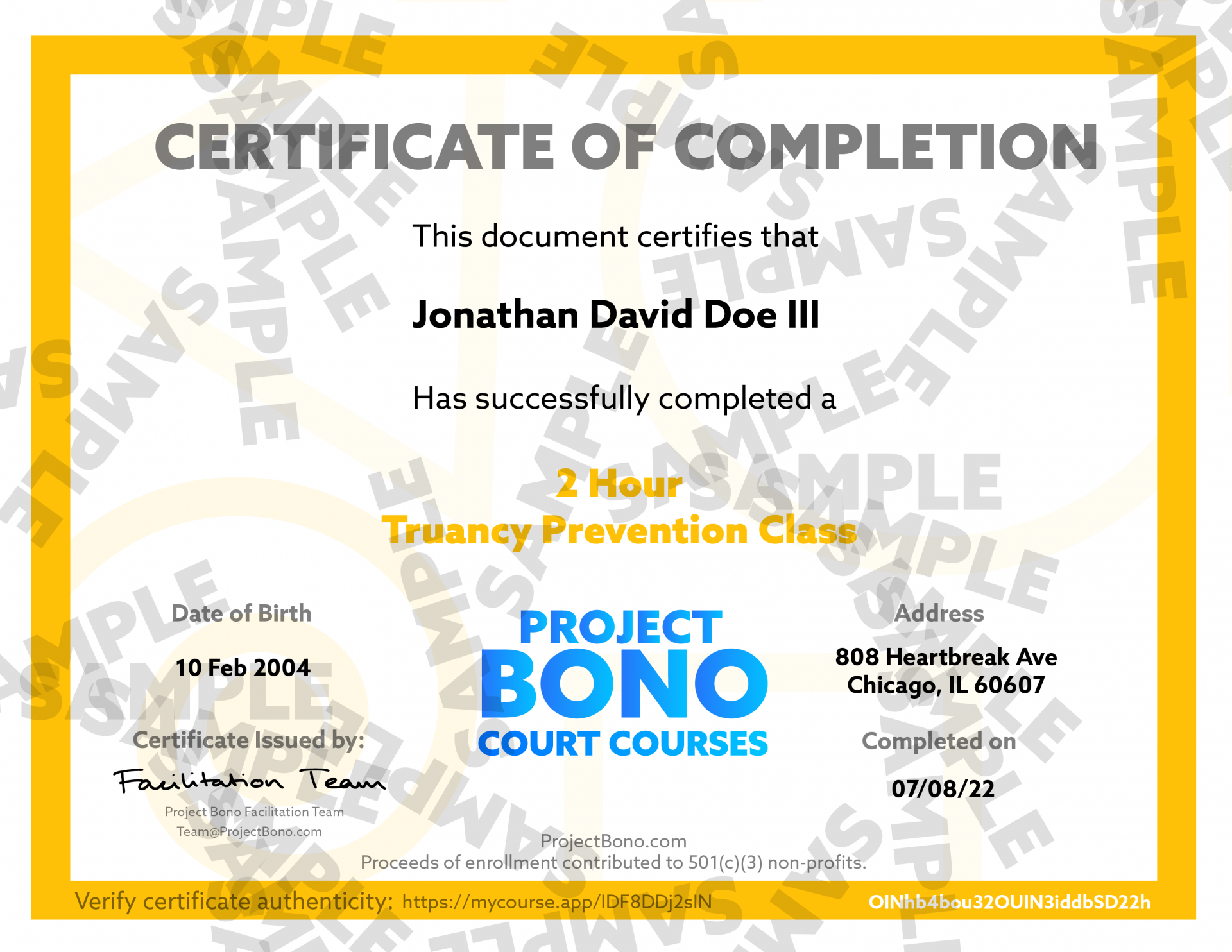 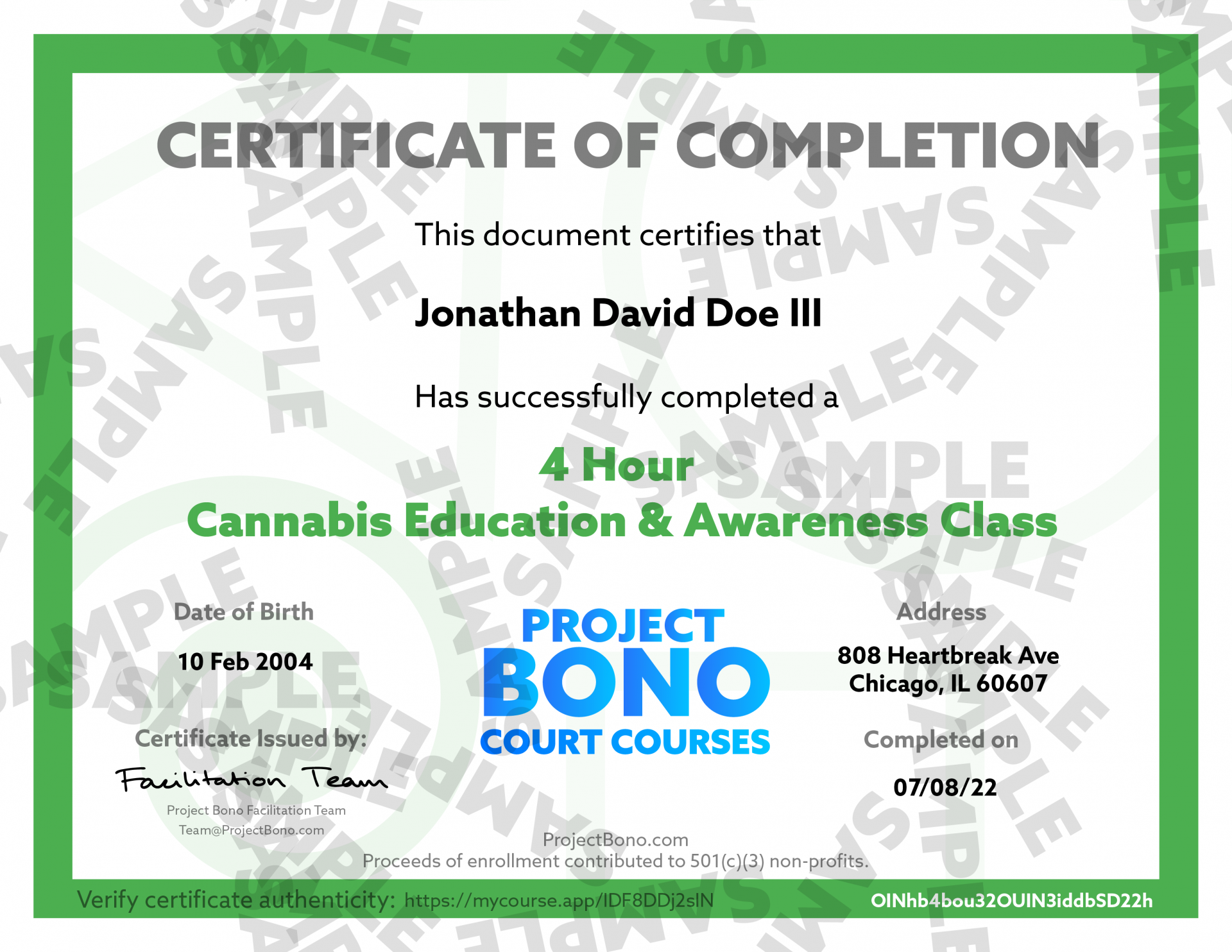 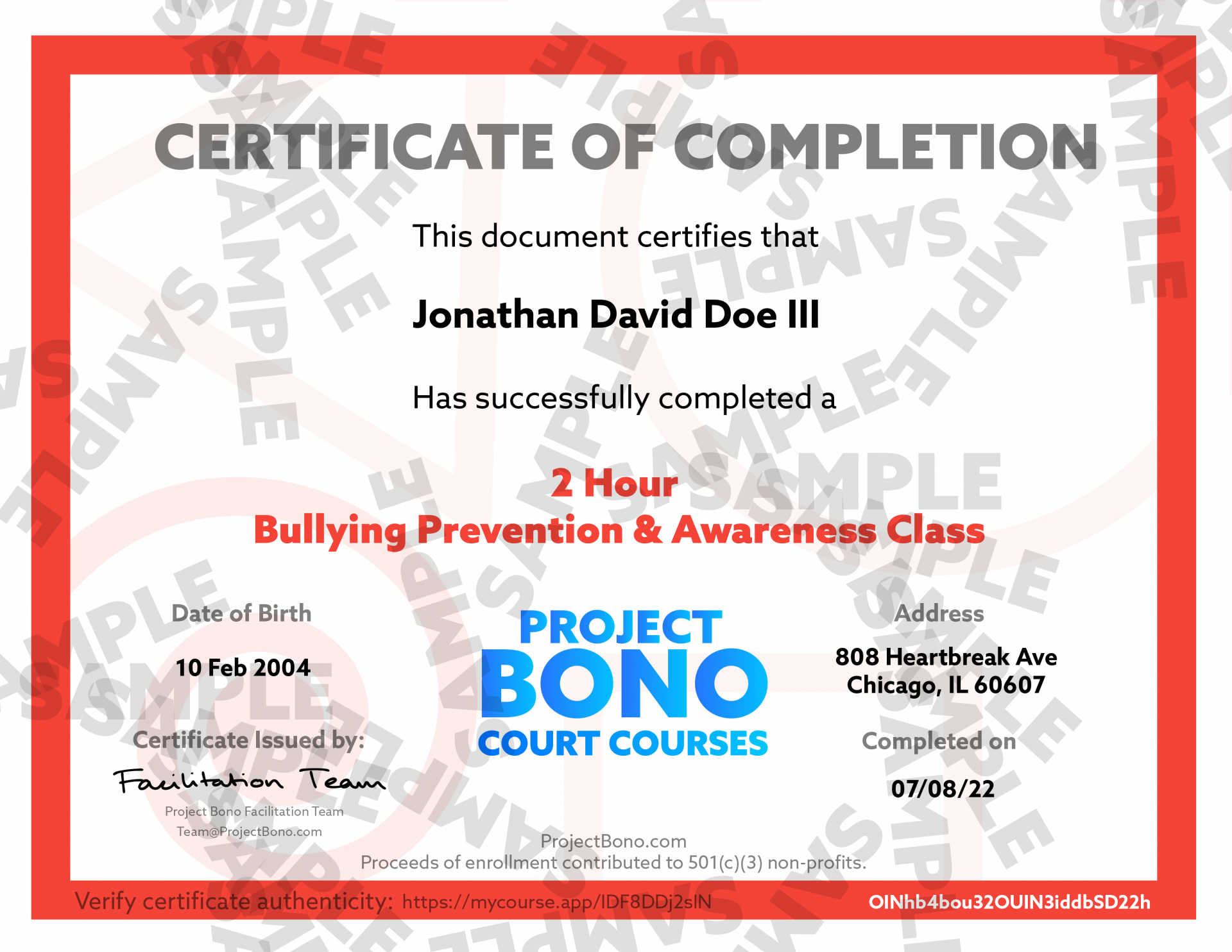 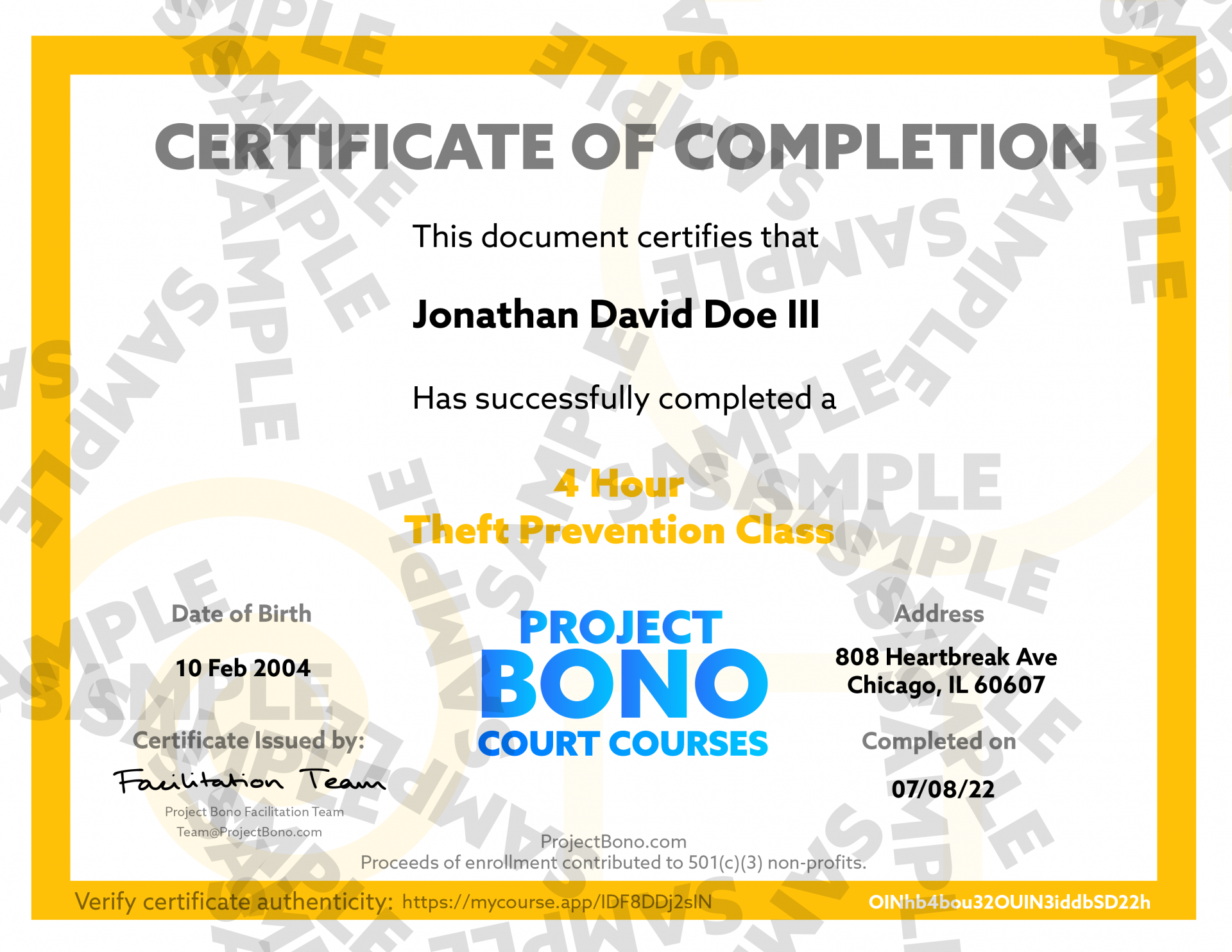 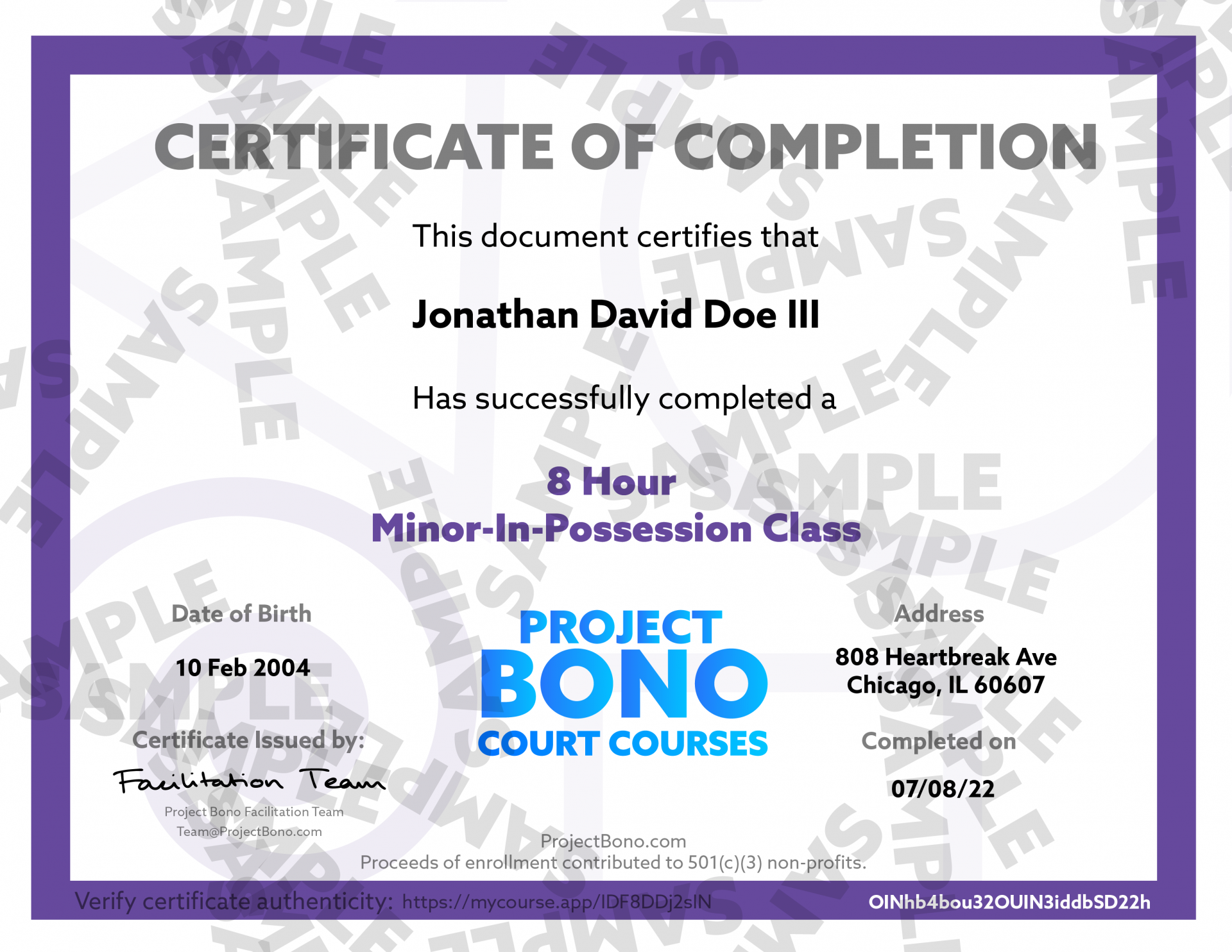 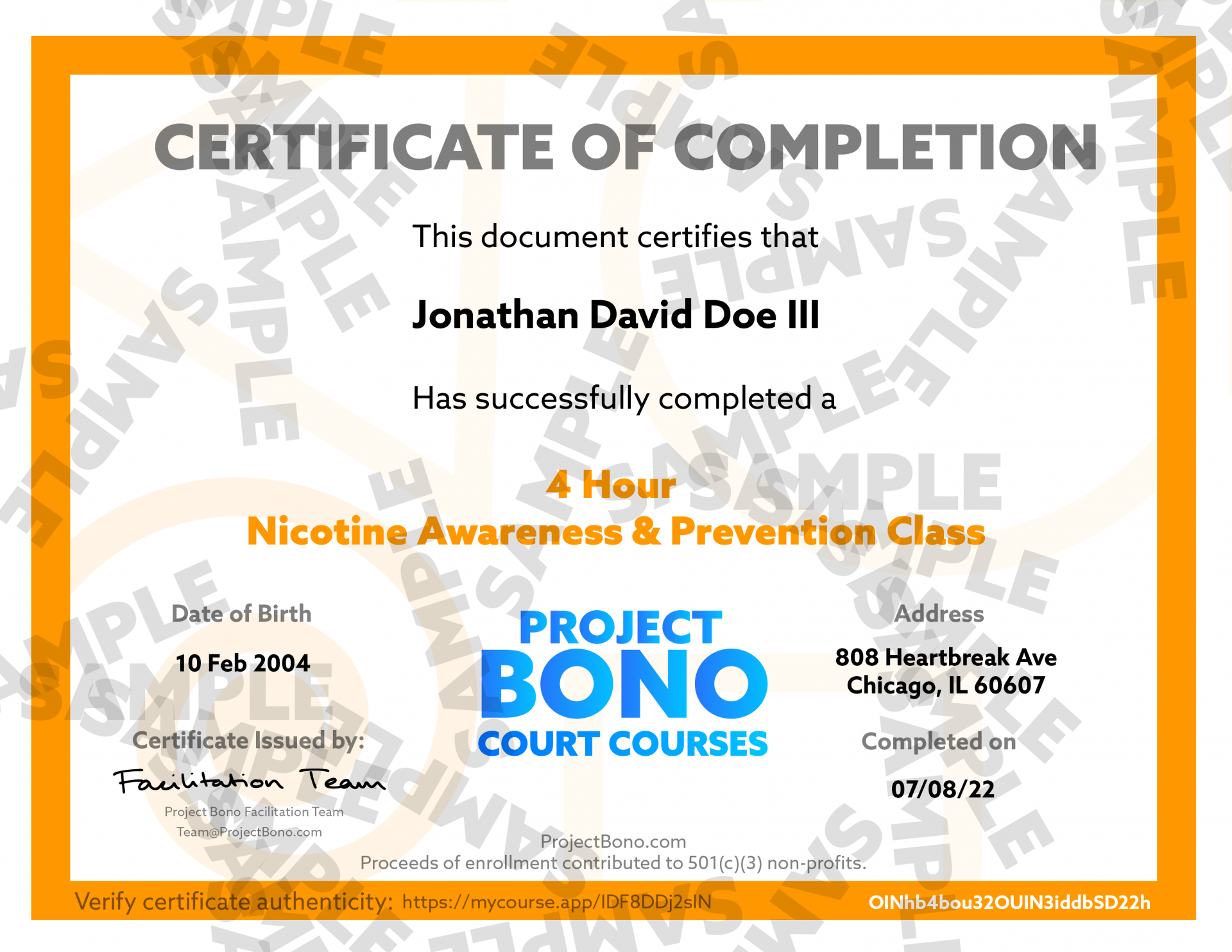 Course contents and formatting are subject to improvements.

We are constantly monitoring current scientific and legislative data to provide you with the most accurate information within our courses. When you purchase any of our courses you are entitled to all future versions of the course.